Over the past few years, we’ve accumulated quite a collection of old LPs— 33 1/3 vinyl records. Some have come by way of tag sales, the swap shack at the transfer station, second-hand stores and record shops. Three so far, have come by what can only be labeled as freaky experiences where I’ve merely had to ask for them, and voila, there they were! The third time happened just five days ago, but let me replay the first two.

Lightning bolt #1: The first time it happened was back in March of 2012. Before I launched this blog, I had posted on Facebook the exciting and mystical story of my Shirley Temple album acquisition.

Some of you may remember this story. Others will simply shake your heads in curly top amazement. My niece, then 17-year-old Rachel and I were just talking about The Little Princess, Shirley Temple on a Friday as we walked in our neighborhood. I told her I was a huge Shirley fan when I was a kid and I had this pink album with her giant face on it. I remember telling her that I’d have to pay dearly to find this sacred album today if I searched on eBay, or the like. Rach is an extremely good sport with her crazy Auntie Tan and nodded politely (if not a little excitedly) when I said we should plan a Shirley Temple movie fest soon.

The very next day, Sean and I were on our way to Torrington to see Shirley MacLaine who was performing a monologue at the Webster Theater across the street. I told him my conversation with our niece and my quest to find THE Shirley Temple album of my childhood. Before the show, we strolled the 1950s style Main Street in Torrington. As fate would have it, or Shirley-shamanism, we took a side street for some “random” reason. At the top of the street was an old, dusty secondhand shop.

I had a weird feeling…so I went in. The store was so cluttered with stacks of LPs and stuff, that I had to walk sideways to find my way to the voice coming from back of the store. I couldn’t see the proprietor, but heard him greet me from under some mountain of rubble. “I am looking for something in particular,” I said to the pile. When the short, graying man stepped out from behind the stack, I relayed my quest for the pink Shirley Temple album.

I held my breath a moment expecting him to laugh. Instead, he turned to a nearby plastic bin filled with albums. “I just took it out of storage THIS morning and brought it to the shop.”
No way! My heart leapt as he extracted the Holy Grail of children’s LPs., but I remained poker-faced. If he saw how much I longed for this treasure, surely (pun intended) he would raise the price to several thousands of dollars. (OK, I exaggerate).

Then, in what felt like super slow mo, he handed the glowing square to me. Wah! Shirley was in perfect condition. The sticker said “$10.” I quickly rummaged through my wallet. Sean had come in by now and instinctively reached for his wallet. Oh, oh! We only had one five and four singles between us at that point. We were about to hit up an ATM when I impulsively entered the shop.

“Can you wait a minute and I’ll go to the ATM?” Sean, my knight said to the man.

“I’ll take nine,” he said. I thought I’d kiss him! I told him I was just saying yesterday how I wanted to find this album. We all laughed how some Shirley Temple-MacLane karma must be in the ether for this to have come to pass. I blessed the man and then bound out into the sidewalk where I cheered and almost did a cart-wheel! 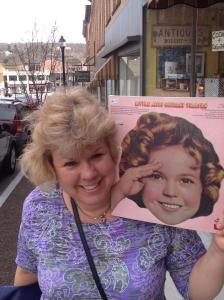 Later I played the album at home—not a scratch or hiss—On the Good Ship Lollypop!

Lightning bolt #2: This past April I was at a huge flea market in south-central Florida with my great pal Bobbi (Can I get a witness to this story Bobbi?) We had browsed the hundreds of stalls of new and old trash and treasures. We washed down fried alligator with a beer at the food court. I told her I was on the look out for the self-titled Foreigner album, the one with the guys all wearing long coats on the jacket. The one I had from when I was a teenager was missing. We had combed through stacks of albums, a mishmash of genres, but so far no Foreigner. On our way out, we hit upon one last stall where an older man had a few stacks of vinyl. My unsinkable pal humored me as I rifled through the first stack of Englebert Humperdink-era artists. The second pile was 70s and 80s rock. “It’s in here,” I turned to Bobbi. “Yeah, right, girlfriend.”
I dug half way through the REO Speedwagons, the Kiss, the Cars. I already had these. Three quarters, through, The Go-Gos, AC/DC, nothing yet. “I can feel it!” I said with mock conviction. “No way,” Bobbi said. Then, the third or so from the bottom was Foreigner, Double Vision. The guys were wearing short coats, not long ones, but it was Foreigner none-the-less, and I didn’t have this one. Three bucks, the guys said. Sold! 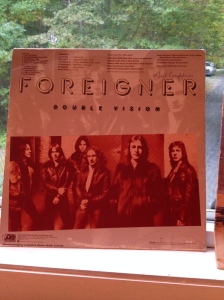 The Third Lightning Strike— just five days ago. Let’s back track a bit. This summer Sean and I listened to Pete Townshend’s memoir Who I Am on cd as we road-tripped here and there. Sean is a huge Who fan and I am trying to study as many styles of memoirs as I can for writing purposes, so it was a great book for both of us to wrap our heads around.

Anyway, Pete Townshend, a prolific musician and writer gave a lot of back story to his interesting life, messed up childhood, rock-stardom, great albums and rock operas The Who created, and Townsend’s own remarkable compositions. One of the lesser shining moments Townsend confessed however, was The Who Sell Out album made in 1967. This wacky record featured The Who singing actual jingles to real products interspersed with their latest songs. The jacket also featured each of the rockers posing with these actual products and real, but painfully corny ad copy that would have made Darin Stevens blush! 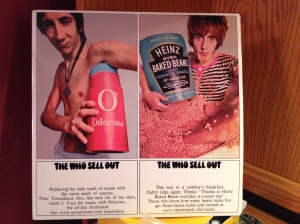 “Wow!” I said to Sean as we envisioned this treasure. After doing a quick mental inventory of the records we had in the trunk at home, we decided we needed to get this album! With our history of asking for albums and having them delivered, we half-jokingly “put it out there” that we needed to find The Who Sell Out, as soon as possible.

A month or so later, “Ding, dong…universe calling.”
We stopped in Mystic, CT on our way home last Wednesday after Sean’s work conference. After a quick lunch at Mystic Pizza, we window-shopped up and down Main Street. We turned down an alley toward a hip coffee shop when we noticed a record store right next door to it.

Sean and I were drawn like moths to a light. “Do you have The Who Sell Out?” I blurted to the guy behind the counter. He looked up dumbfounded. There, in his very hand was The Who Sell Out album! I kid you not. “I was just putting it on E-Bay!” he said. He showed us he had just listed it for $65.
Woh! or Who!
He showed us the unwrapped album with a sticker stating this was a “200 gram Super Vinyl Profile Quiex SV-P.” Huh? Sean translated that it was a special edition re-release between 2000-2005 when the tracks were laid down on this heavy-duty vinyl that weighed 200 grams. This meant it was very high quality and would have incredibly great sound.

“It’s Shirley Temple all over again!” I marveled. Sean quickly relayed our Shirley Temple experience to the record guy. “Wow, be careful what you ask for or you’ll go broke!” He laughed as he gave us his card with the date of a special record sale.

There really was no way the we were not going to purchase this album. He gave us a pretty good break from his E-bay price. It was a still a little more than the usual $1-$6 we are typically willing to pay for vinyl, but we easily justified it as an early birthday present for Sean.

5 thoughts on “Lightning Strikes Three Times: Shirley Temple, Foreignor, then The Who!”